Once you’ve made the jump to light read, anything can happen…
Today is Star Wars Reads Day, one of the newest and most fun SW holidays! So naturally, I spent today reading an awesome SW book. I had intended to read a new book for SWRD, but I didn’t get the chance to run by my local library. So for this year’s SWRD, I’m taking you back to the world of Paul and Hollace Davids’ Jedi Prince series. If you like, you can go and read my Closer Look on the first chapter, The Glove Of Darth Vader. Now, we’re going to find out what The Lost City Of The Jedi is all about. You haven’t heard of the Jedi Prince series? It’s the series that once made the Kesel Run in six paperbacks (Named so for Carl Kesel, who illustrated the books; I warned you about how bad the SW reading puns were going to be…). It’s also a great series written in some of the earliest days of the Expanded Universe (1992, to be exact). And it’s currently one of my favorite SW series. So if you’re planning to run to the library and do some late SWRD reading, but don’t know what to read, perhaps you should join me on a trip to the Lost City with Luke and the gang… of course, I’m sure most of you are reading Heir To The Empire, or Kenobi, or even Jedi Academy, but all the same, let’s open up something a little different today… 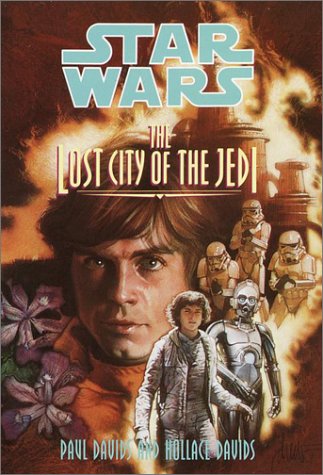