SW Reads: Heir To The Jedi

All right, time to dig into another great Star Wars novel! I’m excited about this one, can you tell? 🙂 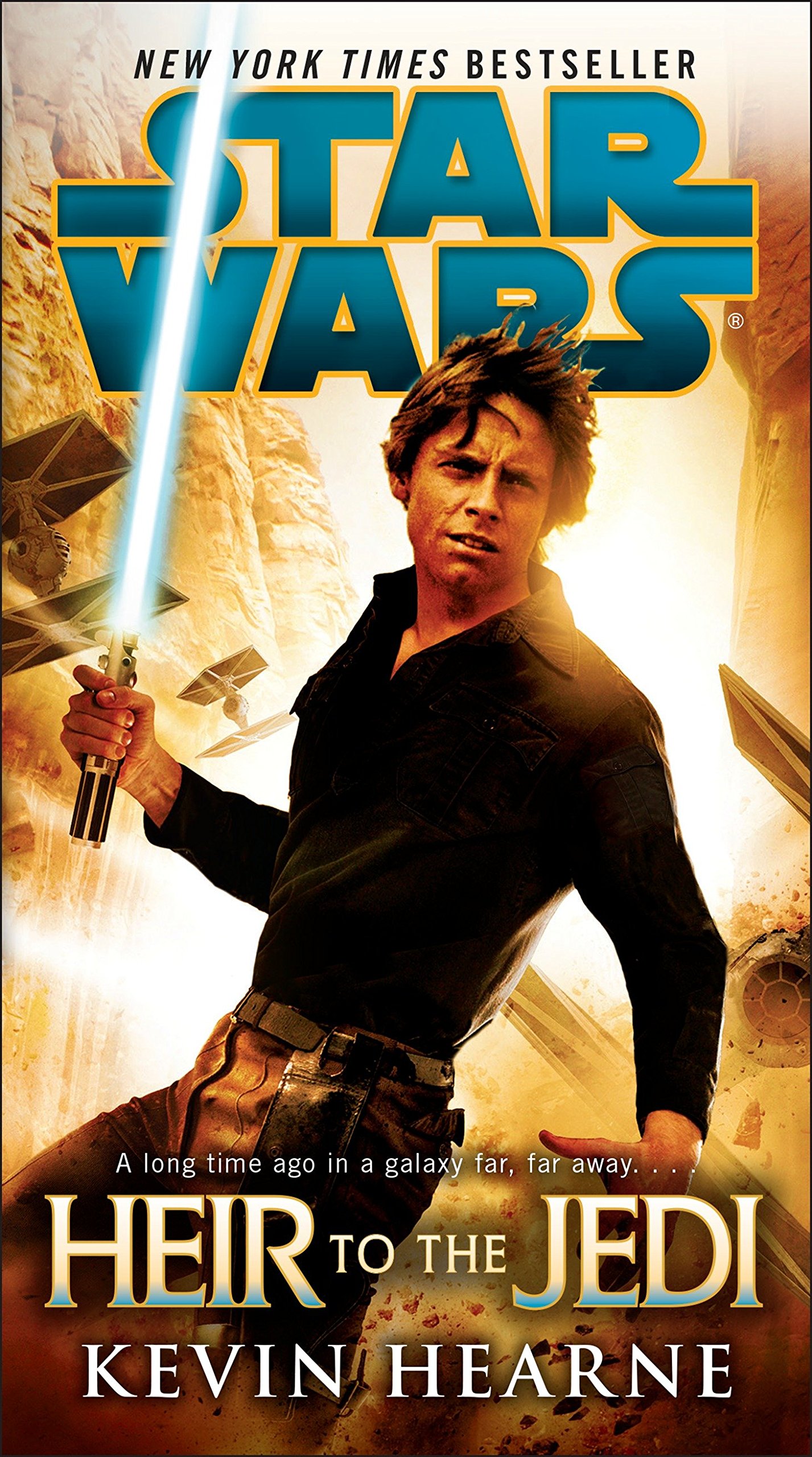 Now, in case you didn’t know, Jason Fry’s The Weapon Of A Jedi might be my favorite SW novel of all time. So coming into another Luke Skywalker story with Kevin Hearne’s Heir To The Jedi, I had very very high expectations. And since I’ve never read anything else by Mr. Hearne, I really didn’t know what to expect.
But good news: my expectations were beyond met!

Heir pretty much encapsulates everything I love about Star Wars. It has all manner of thrills and chills, it’s character-driven in the most masterful way, and there is no shortage of laughter and heart. What surprised me most, perhaps, was how easy it was to read. I expected a more dramatic tone somehow, perhaps since the last canon novel I read was Tarkin. But this book is definitely the most easygoing and fun full-length SW novel I’ve read so far! Not to say it doesn’t have its share of drama, because it absolutely does. But reading it was such a pleasurable experience! I like to think Heir is to modern SW novels as Solo is to the films. Because both stories put full focus on these amazing characters, and find just the right balance of feels and fun! And Heir‘s also an easy read because it doesn’t overwhelm us with too much new information or technical terms. Don’t get me wrong, digging into the fine details is one of my favorite things about SW books. But there’s a welcome, comfortable feel from Mr. Hearne’s descriptions that makes everything tangible and completely understandable. One of my favorite examples was with the food, which for the most part, was often just a slightly-spacey version of what we eat on earth. The relatability of the SW galaxy shines brightly in this book, and makes me feel right at home, even as we follow Luke through all manner of unique, unusual, and sometimes-terrifying worlds.

Honestly, I can’t recommend this book enough. If you’re new to SW books and don’t want to go the read-them-all-by-release-date route I’m going, this would make a great first novel! Weapon isn’t my only fave Luke story now 🙂

– A few pages in and I’m already loving reading directly from Luke’s perspective. Like with Weapon Of A Jedi, (my favorite Luke story ATM) I love getting to know Luke at this early time after the battle of Yavin, when he was young, idealistic, and trying to figure out the Force.
– Someone get me a model of the Desert Jewel stat! Or at least a Lego kit!
– So Luke doesn’t speak astromech? Huh. I would not have guessed. Maybe he picks up some by Empire? Crud I need to watch the OT again…
– Cool seeing a new side of Rodia. But glad I can’t smell it. Points for Mr. Hearne’s descriptions, though!
– I don’t know what a needle gun does, but it sounds pretty cool, in a scary way.
– There’s nothing quite as stirring as a Clone Wars tale of Jedi heroics! I love that Luke got another glimpse into the life of his father.
– OOOOOOH A PURPLE LIGHTSABER!!
– Datapads take holo stills like smartphones take photos. A longtime SW question of mine has been answered!
– The more I read this novel, the more I fall in love with its author’s cleverness and choice of words. Not to mention how wonderfully he takes on Luke’s voice.
– My fave line so far: “I hadn’t read the histories of those ‘seduced’ by the dark side, but I doubted any of them had been corrupted by a vegetable of questionable nutritional value.” XD
– The Promise and the Redemption are utterly gorgeous ship names.
– YIKES the skullborers might be the scariest SW creatures in a while. I think I’d rather hug a rathtar before stepping foot on a world with possibly-sentient brain-eaters!
– Pffft Luke and Nakari’s mutual cooking fails cracked me up 😛
– I am so so glad to know ice cream exists in SW. Knowing our differing worlds share something so sweet makes me smile :3
– I never considered until now that a galaxy with so many many diverse peoples would call for a lot of different medical supplies, techniques, and knowledge. Wonder how long it’d take the average med student to graduate?
– I just realized the chapter openings all have some scientific-looking math formulas around the wording. It must have connections later in the story… wish I was more adept at math so I could see if there’s some kind of special code to crack.
– Is rancor sauce really made of rancors, or is it just something super super spicy? Also knowing what Corellia looks like, I get the feeling I wouldn’t want to eat noodles grown there… THIS BOOK IS SO FUN THO.
– Communicating with higher math? That’s a totally neat concept, but I’m with Luke… I doubt I could speak it fluently. As you might’ve noticed, I’m a writer, not a mathematician.
– They say the average galactic citizen doesn’t know of Vader. Wonder how anyone would know to even write a parody song? Hmm. An interesting exception to the rule.
– I like Nakari a lot; she’s a fun, interesting character and a great match for Luke. But I can’t help but be slightly suspicious about her for some reason…
– Something tells me TIE pilots probably don’t get very long lunch breaks. If they get lunch breaks at all. Who wants a tasty ration stick??
– Epic!! A seismic charge! Y’know, that’s one of my favorite sounds in all of Star Wars.
– Once again, Artoo saves the day, and proves once more that the SW saga would never have happened without him!
– A droid with a fake mustache is always a good thing XD
– AHHHH LUKE AND NAKARI ARE SO CUTE!! I WISH I STILL DIDN’T HAVE DOUBTS.
– Oh no… I’m so sorry I spent so much of this book suspicious about her. Looking back, I realize there was little to incriminate her. Previous SW stories and Leia’s suspicions were the only things I was really going on, besides the fact the relationship was never referred to or evidenced in later stories. I figured the reason why Luke and Nakari didn’t end up with fifteen grandkids by Episode VIII was because she had ill intent. Never once did I consider that she could simply have died. I guess I loved her character enough that I didn’t want to go that route. It was safer to assume she was a scoundrel, because scoundrels could still be redeemed. But through this tragic turn, we see Luke facing the very thing that turned his father down a dark path, and coming out stronger. We know, of course, that Luke will still be prone to react rashly when his friends are in trouble, but it speaks volumes that he was able to resist the darkness and find peace in this moment. And he comes through this loss in a way decidedly the Jedi Order would not have done, but what was undoubtedly the right way to do it: through tears and through joyful memories. So much wow. What a book!

Thanks for reading along with me today. ‘Til next week!