You may or may not know it, but on the official Star Wars website, Master Kenobi is the CHARACTER OF THE WEEK!
It’s totally awesome to me, because I love this guy! And I know I’m not the only one out there who’s totally psyched about this. If you asked me who my favorite SW character is, I’d just say “Probably all the good guys”, but sometimes I just say “Obi-Wan Kenobi”, ’cause he’s kinda my go-to favorite; the one that just sums up all the awesomeness of all the SW good guys. I could truly write a long paragraph as to why he’s awesome (and I will… once I get ahold of the rest of the SW movies and TCW season sets), but for today, to celebrate what is the Obi-Wan Wednesday of this Obi-Wan Week, I’m just gonna post some seriously cool fun stuff featuring him. The one, the only, the Negotiator, the “wise old hermit”, General/Master Obi-Wan Kenobi! (Some folks call him Ben, and a couple of people call him “Obi” 🙂 )
NOTE: Contains spoilers from TCW Season 5, the Clone Wars Miniseries, and The Phantom Clone. The Lego shorts are best watched with some knowledge of the Original and Prequel trilogies in general.

First up, some of the most “Ben-tastic” Lego shorts for your enjoyment!

Obi-Wan’s in a good mood in this one. I bet it’s because it’s Taco Night at the Temple cafeteria 🙂 Go get ’em Obi-Wan!

I love his jabs at Ventress. (“Don’t suppose I can convince you to switch sides, can I?”) Classic Obi-Wan…

The title makes more sense than it sounds.


For someone who doesn’t like flying, he does a pretty good job at it in these two as he helps the Clones take down the droids.

I also have this little gem of Clone Wars Miniseries concept art! Featured in an old Star Wars Insider of my brother’s is this Paul Rudish delight 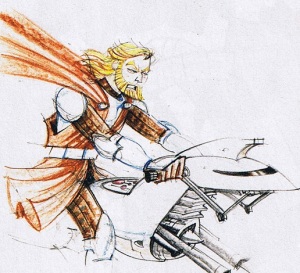 (Image credit: Star Wars Insider #69)
IT. IS. AWESOME. I KNOW I CAN’T STOP GEEKING OUT OVER IT!!
And here’s the epic collectible action figure they made of him in the same cape-and-Clone-armor getup, but live-action-looking!

(Image credit: XL-Shop.com)
AWESOMENESS ACHIEVED. I’m perfectly happy with my TCW Season 1 Obi-Wan action figure and don’t plan to get multiple versions of any character (’cause I’m weird like that), but there are more than a few Obi-Wans that tempt me… I mean, he’s just so darn cool!

Plus, you guys do know that the TCW Season 5 cover has him front and center! In his wicked epic cool Mandalorian armor! So, a good reason to celebrate him in general (Hehehe, get it? In… “general“?!” ‘Cause he’s a… um… yeah…)

Sorry, Master… here’s that epic cover art I was talking about.

Also, a little tip for those of you who own or want to own TCW Season 1: Obi-Wan, on this menu, has an Easter Egg when you click the Republic symbol on his jacket. It’s pretty awesome. Unless you own the Blu-Ray… I don’t know if it’s any different or not. 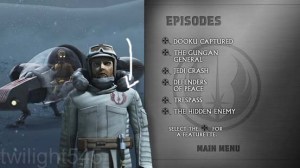 So I hope that this was a fun little cornucopia of Kenobi for you out there! Sorry I didn’t have much in terms of the movies themselves, but hey! If he becomes Character of the Week again in a few years, I’ll probably have way more stuff to use then. But as far as I’m concerned, TCW is one of the very best ways to watch Obi-Wan at his best (Which is all the time, of course) 😀
Enjoy your vacation or meditative retreat or whatever, Obi-Wan!