Hello, Star Wars fan-family! I had nearly a month’s worth of wireless issues keeping me from posting, but I have plenty to write about! Including, of course, some more Star Wars Reads! (No longer really Summer Reads, but oh well) Today we’re exploring not one, but two of Jude Watson’s incredible Jedi Quest series. If you like, you can read my posts on the previous books The Path To Truth, The Way Of The Apprentice, and The Trail Of The Jedi in the respective links. (Though I will warn you, they are old and not the same quality posts I write now.)

But yes, what more can I say on these lovely books? They are among my top top favorites! They’re so richly detailed and so masterfully written. Though I’ve never read a bad SW youth novel, these are so amazingly done that it’s hard to tell them apart from the full-length novels. Each chapter is full of deep intrigue, great character moments, and fascinating, totally-believable ideas of the state of the galaxy before the Clone Wars. Ms. Watson digs in deep on the Force, the Jedi, and Obi-Wan and Anakin’s long, sometimes-difficult road to true brotherhood. I have yet to read the recently-released Anakin And Obi-Wan comics to know what these years look like from a modern, canon perspective, but Ms. Watson’s works seem to line up with the canon stories almost flawlessly. And either way, they are amazing reads. I highly, highly recommend, especially if you enjoy the Prequels and TCW as much as I do, or if you want a better idea of what was going on between I and II.

Now, let’s dive into the fine details of these chapters. First, The Dangerous Games, an epic with both podracing and political scandal!
Contains spoilers from the aforementioned book, and some of the books prior. And if you haven’t seen Episode I you will be a a disadvantage. 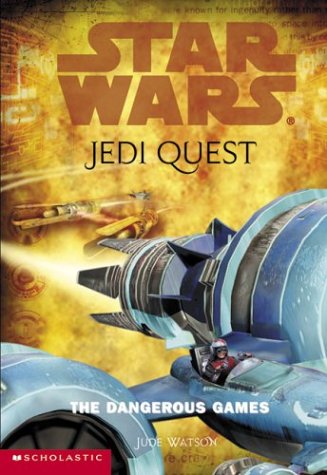 – Traffic does happen in the SW universe, and not just in The Yoda Chronicles! That’s why there are spacelane officers.
– “I know, I know, feel my anger and let it go. But do I have to be a Jedi all the time, even in space traffic?” #Relatable
– Y’know I remembered a while back on one of my Rebels posts wondering if there’s a certain age you can start driving/flying in the SW universe. There’s apparently nothing out-of-the-ordinary about 14-year-old Anakin at the controls, so maybe there isn’t? Of course, I know this isn’t the final canon word, but it’s reasonable. Or maybe it’s different, depending on where in the galaxy you are.
– Ms. Watson paints the most vivid picture of this world and where the games are held. It’s fascinating and gripping! I feel like I’m there. I can feel the electricity of the busy crowds of the city, and imagining being there for a galaxywide sporting event is a thrill! Anyone else smelling hot dogs and pretzels? But at the same time, through Obi-Wan’s explanations and Anakin’s observations, we see that Eusebus isn’t as perfect and glossy as it makes itself out to be, giving me a sense of realistic caution, and a better understanding of why the Jedi’s mission is so important today.
– I just love Obi-Wan and Siri’s bond! Their conversations are so fun to read, and feel so natural and easygoing!
– I’m just now imagining Ferus Olin to have an Irish accent. Because Irish accents are cool, and it adds a little something more to his character than just the serious, unaccented voice I was giving him before.
– I also love Obi-Wan’s solid friendship with Didi and Astri. It’s one of those things that reminds me “oh yeah, Jude Watson wrote another SW series before this one and I really need to read it already”.
– Though Bog’s a bit of a blowhard, I still find him an highly entertaining character.
– I get it too, Ani. YAS PODRACINGGG!!
– Heheh ok so maybe “solid” isn’t a good description for Obi-Wan and Didi’s friendship, but it says much of Master Kenobi’s character that he’s still willing to help out the poor hapless charlatan.
– And Tru Veld is still one of my faves of her characters. His species is so cool, and he’s the most laid-back ball of sunshine in the Jedi Order! I hope he’ll come along the ride for more stories in the future 😀
– It’s so easy to agree with Anakin’s decision to help the Tyerell kids. Even though he disobeyed Obi-Wan to do it, I could see myself doing the same thing if I had the ability to do so. And of course, we all have to remember the Jedi are not right about everything. But then, at the same time, we know Anakin is doing this not just out of compassion, but also from a slight desire for vengeance. Not to mention his love of the game itself. There’s so many gray areas here, it leaves us readers with a lot to chew on.
– I absolutely can hear an Italian accent for Didi and a thick New York accent for Fligh. BTW if you didn’t read my last Reads post, you missed the part when I mentioned that I love reading Star Wars books out loud so I can do the voices.
– Seriously? Still no lap restraints in these things? Of course, maybe these air taxis are more like those little shuttles or golf carts they have in sports stadium parking lots and you’re just expected to hold on to something ’til you get there…
– Jedi have a seriously epic eye for detail and an amazing memory! This is why they’re so good at the peacekeeping game!
– I know there’s a lot of difference between them in reality, but this multi-leveled swoop bike obstacle course calls to mind the landspeeder race tunnels in the Droids series. Coincidence…?
– Aww! There was once a little yellow-tailed summerbird living in the Senate Building! Things you can learn from a good SW novel! 🙂
– Pretty sure Scorch Zanales has the coolest name of any podracer driver in the SW universe.
– And WHOAAAAA WHAT AN UNEXPECTED ENDING. Such good stuff!

Now for the next chapter, and possibly my new favorite in the series: the chilling mystery that is The Master Of Disguise!
Again, contains spoilers from the aforementioned book and some of the books prior. 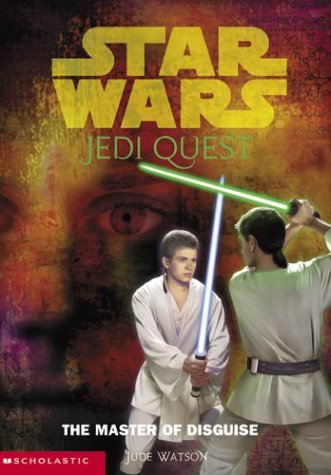 – LOL the cover art totally threw me off. I kept thinking Anakin was dueling a changeling or something… I didn’t quite recognize Ferus from the back…
– Yeah when you put it that way, with such masterful, tangible descriptions, I can see why one might think sand is bleh.
– Wow! Darra and I are twins! She looked blonde to me on an earlier book’s cover art, but they’re describing it as copper-and-gold, which is exactly my color!
– I must try out her bright-ribboned padawan braid. If anyone knows of a good padawan-braiding tutorial I’d be forever grateful, because those tiny things are so strangely difficult to make… hehe sorry for all the hair talk.
– It’s amazing how these books can be both beautiful and heartbreaking in parts. Between the clear devastation of war and the regrets Anakin left behind on Tatooine, my reactions are definitely what you might refer to as “all the feels”.
– Oooh so many branches of science to study! It would be fun to be a scientist in the SW galaxy, ’cause with so many worlds, there are nearly infinite amounts of things to discover and study! Yes I am a science nerd. Did I forget to mention that?
– I really appreciate the moments with Madame Jocasta in this book and the last. I like the way Ms. Watson writes her, making her a tough old bird with a solid sense of humor!
– OK Yoda’s appearance in here was the highlight of my day. He may be my favorite voice to read out loud now.
– Whoa Tru’s lightsaber is orange? That is so cool. Could be orange ‘sabers are just for training here, but still. I think it’d be a good lightsaber color!
– Chapter Eight is so fun. Obi-Wan and Jocasta, Jedi mystery-solvers! Also glad to know that Obi-Wan likes tea, because so do I 🙂
– I’m actually starting to want Soara Antana to teach me lightsaber techniques, too. I might be a glutton for punishment, but I do love a challenge.
– OMG NOW I KNOW WHY THE BOOK IS TITLED WHAT IT IS. I DID NOT SEE THAT COMING.
– I am both wildly fascinated and horribly shook over these concepts. Granta Omega just got scarier. And non-Force-sensitive Sith cults? It just felt colder in here.
– I hope someday I learn to write plots this intricate and in-depth!
– YADDLE SPEAKS! That was really neat, because I’m 99% sure I’ll never read a SW novel giving her a spoken line again.
– Just when you think it can’t get any more intense, IT GETS SO MUCH MORE INTENSE! But that’s something I adore about this series. And this book I think may be the most intense yet!

Ahh, aren’t those just fantastic? Well, *does Yoda impression again* much to blog on, I still have. Look for one last Reads post next week, and then there’s this upcoming new series I must discuss, and also I received an amazing visual encyclopedia for my birthday, so… yep. Lots of Star Wars equals lots to write!

SW Summer Reads – Jedi Quest #1: The Way Of The Apprentice

Today we continue onward with my Star Wars Summer Reads series, in which I ramble on about some of the first SW books I ever read (not to mention some of the best SW books I’ve ever read period). This week I’m super happy to introduce to you the first official book of Jude Watson’s Jedi Quest series: The Way Of The Apprentice. I’d like to hope I’m not the only person who’s reading them and enjoys them as much as the films! So if you haven’t read it yet, go read it, perhaps reread it if it’s been a while, and then join me in my observations and discussions as we dive into The Way Of The Apprentice! And just your luck, I don’t have any good Star Wars reading puns on the top of my head at the moment… 🙂
NOTE: Contains spoilers from Jedi Quest #1: The Way Of The Apprentice, Jedi Quest: The Path To Truth, Episode II, Episode III, and TCW episode Deception (and the related episodes)