There’s all this exciting news buzzing about in the SW Universe, and I chose to write a blog about a book written twenty years ago. Yes, I am kinda weird, I know. But who am I to postpone the finale for this year’s SW Summer Reads blogs? So, patience! I’ll write my thoughts on those things another day. Right now, I’m taking a nostalgic look back on the first book of Paul and Hollace Davids’ Jedi Prince series: The Glove of Darth Vader.
Ah yes, the Jedi Prince series… this was the first series and currently the only series I’ve read that takes place post-Episode VI. Back in 2011, shortly after reading my first SW fiction Jedi Quest, I picked up book five, Queen Of The Empire, at my library. Yes. I actually kinda read them backwards. Somehow, I didn’t notice the obvious number “5” on the weathered old hardcover’s spine. I am really really glad that I didn’t end up reading book six first. However, despite that I read them out of order, I couldn’t help but enjoy them. You could sit there and be all “they’re not serious enough” or “they’re not legit enough to be Expanded Universe” or whatever it is that critical SW fans think, but I love them. Not to criticize Expanded Universe books myself, but I too often hear of SW books that are darker than I’d prefer. I know that SW has its dark moments and tragedies and I’m OK with it, but you likely won’t see me reading anything where a main-main-hero character gets killed, a main-main-hero character goes all Sith on us, or anything centering around a super-evil bad guy. Not saying I might not ever, but the Davids have their own lighthearted, exciting, intense, well-written, epic in scale, and easy-to-read-for-those-of-us-who-still-are-learning-about-Star-Wars SW stories that I already am into. This particular one, The Glove Of Darth Vader, was published in 1992, which, if I’m correct, was the renaissance of Expanded Universe fiction. This series, as you may already know, takes place after the events of Episode VI with our familiar Original Trilogy friends (I’m finally talking more about the Original Trilogy! Yayyyy!!). So go find the book and read it if you haven’t, and join me and we can rule the galaxy as… wait, what?! No… I meant, and join me on reading The Glove Of Darth Vader! 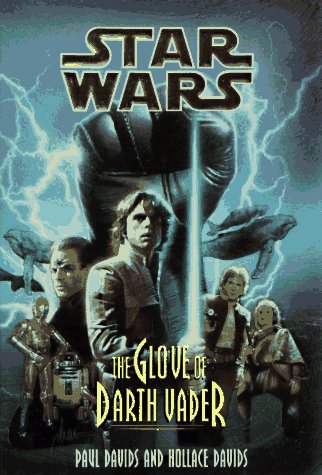