OK, so it’s now May! The most Star Wars-y month of the year! And you know what that means, don’t you?? Star Wars Day! Now, some of you who are new to the fandom may not realize that such a holiday actually exists. Well, it’s not on any calendars yet that I’m aware of, but it oughta be! I didn’t find this out until recently, but it’s been celebrated since 1978! Why May 4th? It’s a pun, “May The Fourth Be With You”, get it? There’s also a Star Wars Day II if you can believe it (that would be “Revenge Of The Fifth”). I know this is second nature to the Jedi Masters of the Star Wars fandom, but I literally didn’t find out about SW Day II until a couple months ago. And I found out about Star Wars Day itself only two years ago! You guys want to know what I did for my first May The Fourth? I saw Phantom Menace for the first time ever! Not in a conventional way, though… I watched my brother’s newly-obtained Japanese imported laserdisc (he owns like four versions of all the films… I honestly don’t remember why I chose his version that’s a precursor to the DVD). It was an incredible experience. I was so blissfully unaware as to how much I didn’t know before hand! It was so easy to love these characters… my respect for Qui-Gon went up like 200% that day! Everything just made more sense in my then-limited knowledge about Star Wars! Plus, it’s an amazing amazing film. Really, if I had to say what my fave Prequel Trilogy film was, I’m tempted to say it’s this one, but then I always backtrack and remind myself that I love them all equally honestly and truly. Dude, it was nothing short of love X3 Was it different watching the Japanese laserdisc? A little, considering that I had to flip the disc over halfway through the film and there were Japanese subtitles through the whole thing (which made it really difficult whenever someone spoke Huttese and what should’ve been Huttese-to-English subtitles were now Huttese-to-Japanese subtiles… hence why I stick to the Blu-Ray and DVD when I watch it these days), but it didn’t change my feelings for the films. I loved it… Jar Jar and all! (There, I admitted it; I don’t have anything against Jar Jar Binks! I’ll explain why he’s so awesome on another blog…) And thus, I began watching the entirety of the Prequels, rewatching the Originals, and watching the Clone Wars series! Ah, memories…
What did I do last year? Not much… it was a slow day and I wasn’t able do much of anything Star Wars-y for some reason. But this year’s gonna be different! I now know more about SW Day’s origins, and my Star Wars obsession has peaked more this past year. What do I have planned, you ask?
First, I’m going to watch some Clone Wars episodes. Gotta rewatch more of Season 2 fo’ sho 🙂 Secondly, I definitely want to watch Episode IV again. Thirdly, I really want to read one of my new SW books (Paul and Hollace Davids’ Jedi Prince series for the win!). I have no idea what else’ll happen that day, but I’ll most certainly update you guys. I also have intentions to finally see the TCW movie on Revenge Of The Fifth (IDK why I haven’t gotten around to seeing it yet, so this year I’m finally finally going to see it for realz! So excited!!). Like say, I’ll totes update you all.
Oh, and here’s a weird little tip for you Star Wars fans out there. Did you know that when you mix Double Chocolate Krave cereal with skim milk, the milk turns blueish? I found this out when I ended up having to use skim milk in my cereal instead of my usual whole milk. It was so freaky! If you’re a Padawan SW fan, you probably have no idea what blue milk has to do with anything. Well, it’s apparently a big deal if you grew up around Aunt Beru! I have fond memories of eating Krave while watching TCW during Season 5… so now it’s officially a SW cereal! Of course, perhaps you’re more hardcore a SW fan… if so, you might want a legit SW cereal for breakfast… 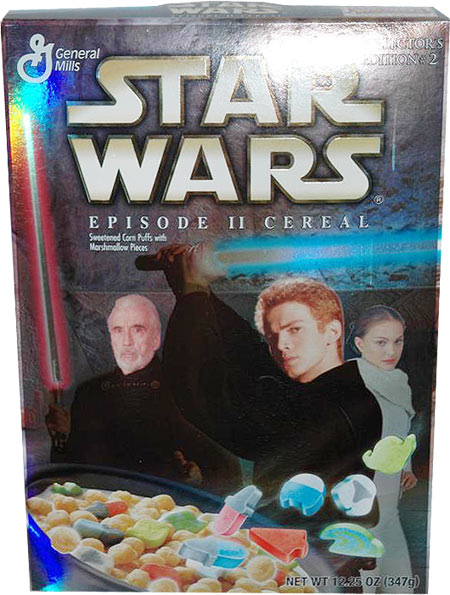 (Image credit: MrBreakfast.com)
I remember eating this stuff… yum yum… anybody else want to enjoy a delicious 11-year-old bowl of Attack Of The Clones cereal? Nothing personal, but I think I’m going to just eat pancakes (Though the boxes are really cool… they had one box that had Obi-Wan and Jango Fett on it! #GottaLoveObiWan).
So naturally, I’m super hyped. It certainly doesn’t help to have rewatched bits of Phantom Menace yesterday and to have reread Zorba The Hutt’s Revenge (of the series I mentioned earlier) today. Bottom line, I’ve got a feeling that this year’s Star Wars Day and Star Wars Day II will be the best Star Wars Days yet!
Keep The Peace and May The Fourth Be With You,
– Twilight